Effective management requires that commitment, dedication, and a variety of skills be represented on the Board of Directors.

﻿Current Board of Directors

​Sheila Groves, Chair
A North Carolina educator, Sheila was employed by Guilford County School System as a Reading Recovery and elementary education teacher. She represented local educators as president of the Greater Guilford County Association for Childhood Education International. Prior to retirement, she was an adjunct instructor and supervised elementary interns in the School of Education at UNC Greensboro. Sheila received the UNCG School of Education Distinguished Career Award.
As a member of several professional organizations, Sheila has made significant contributions at local, state, and national levels. She served as president of the NC State Organization of the Delta Kappa Gamma Society International and chaired the 2009-2011 ad hoc Committee for Planned Giving, beginning the inquiry into the creation of the NC DKG Educational Foundation.

Sheila is engaged in her community as a volunteer for Guilford County Schools and a docent for the Greensboro Historical Museum.

Sharon Frazier, Vice Chair
​​Sharon Frazier is a retired media specialist with the Halifax County School System. She is presently serving as vice-chairman of the NC DKG Educational Foundation Board.  A member of Alpha Kappa Chapter in Region I, Sharon has been a member of DKG for 25 years. She has served as Second Vice President, First Vice President, and President of her chapter. She has served as the Editor of the Alpha Kappa newsletter for 19 years. Her leadership roles in NC DKG have been numerous. Sharon was Region I Director (2009-2011). During this time she was also Convention Chair in Rocky Mount (2010). Sharon chaired the State Leadership Committee, Communications Committee, the Awards Committee (2014), and has served as a member on other state committees. She volunteers in the media center and at the elementary school of her grandchildren.

​Dr. Mary M. Cauley, Secretary
​Dr. Mary M. Cauley is a retiree from the faculty at East Carolina University (ECU).  Prior to retirement, she directed the university-wide Cooperative Education program and taught in the Graduate School of Education at ECU. Immediately following retirement, she was engaged in educational consulting as a service for colleges for more than ten years, providing a variety of educational, management, and leadership services for such initiatives as grant writing, institutional effectiveness, accreditation issues, and special projects.

In 2006 Dr. Cauley was appointed by the Lenoir County Board of Commissioners to serve on the UNC Lenoir Health Care (formerly Lenoir Memorial Hospital) Board of Directors.  She chaired a number of Board committees, including Finance and Investment, Audit, Nominations, and Strategic Planning. She was the Board representative on the Medical Staff Credentialing Committee for several years. While serving the hospital Board as Treasurer, she also functioned as liaison to the Hospital Foundation Board. She served as Vice Chairman of the Board for six years and retired from the Board after more than twelve years.

​Betty Marshall, Treasurer
​A retired National Board Certified educator, Betty taught mathematics in private and public schools in Virginia and North Carolina to middle school, high school, and community college students.  She is a former Teacher of the Year for Wilson County, NC.  She served as president and treasurer of the Wilson County chapter of the NC Association of Educators and treasurer of the Lee County NCAE.  As president of Wilson's chapter of the American Association of University Women (AAUW), she organized a Career Day for middle school girls. In Delta Kappa Gamma, she chaired the state Finance Committee for two biennia and served 4 years on the DKG International Society's Finance Committee.  She has served as president of two local DKG chapters as well as the NC state organization.  As state president she initiated convention fundraising activities to generate non-dues revenue.  She appointed the first of several ad hoc committees to study establishing a DKG Educational Foundation in North Carolina.  She is also a Registered Parliamentarian, having served as the state DKG parliamentarian.

Dr. Judith B. Carlson
A retired professor at Appalachian State University in Boone, Judith spent 22 years in physical education, curriculum development, pedagogy, and teacher education & supervision. Following retirement she was art consultant at Rock Gallery in Blowing Rock. She is actively engaged in Boone United Methodist Church, serving as a Lay Servant, doing hospital visitation, chairing the Boutique in the annual Bazaar, and is a Stephen Minister. Community involvements include the Boone Ladies Golf Association, regularly donating blood platelets for cancer and leukemia patients. She is active in the ASU Women’s Club with Day Trippers; Book Club;  and Mahjong. Judy has chaired the Carolinas Blood Services Board of Directors. She is active in DKG on local (Alpha Gamma Chapter), state, and international levels, Judith is a past state president of NC DKG; has presented workshops at state, regional, and international conventions; has served on International committees and chaired numerous state committees. She authored the 2010 publication of Eta State History 1998-2008 and several articles published in the International Bulletin. She orchestrated the train trip from NC to NYC for the 2012 DKG International Convention. She was involved in the establishment of The NC DKG Educational Foundation and served as the first Board Chair. She remains passionate about the work of the Foundation and is committed to create strong Donor Relations.

​Dot Carter
Dorothy L. Carter is a retired community college dean who began her career in education as an English teacher at the high school level, moved to Randolph Community College in Asheboro as English instructor and later Dean of Instructional Services.  After retirement from RCC, she continued as a consultant with several community colleges in NC.   In DKG, Dot has served as committee member and chairman at the chapter, state, and international levels and served as Eta State President 1987-1989.  A current member of the Foundation Board, she serves as chair of the Grants Committee of the Foundation.

​Ruth Jones
A retired educator, Ruth taught accounting for 34 years at East Carolina University. She’s been a member of the Delta Kappa Gamma Society International since 1969. Ruth has served in a variety of roles in this organization including treasurer, secretary and vice president of her local chapter. She served six years as NC State Organization treasurer guiding and supporting chapter treasurers in their work and conducting training sessions for new chapter treasurers. Currently, Ruth chairs the state Finance Committee.  She is a 2020 recipient of Delta Kappa Gamma’s Star of the Southeast award.
Ruth stays active traveling and serving her church as President of the Women’s Ministry.

​Dr. Barbara Leonard
Currently a member of the Board of Trustees for Davidson County Community College (DCCC), Barbara has served as a trustee since 1992, holding office as Board Chair, Vice Chair, and Secretary.  She has been a member of the DCCC Foundation and has served as Vice President, President, and Past President of the Foundation. As a science educator, Dr. Leonard is a former president of the NC Science Teachers Association (NCSTA) and served on the Finance Committee that oversaw the establishment of a trust fund for NCSTA.  She is currently the Associate Dean of the School of Education at High Point University.  Offices held within the Delta Kappa Gamma Society International in North Carolina (Eta State) have been President, Vice President, and chair of various committees within her local DKG chapter, and Director of Eta State’s Region VII. She also serves by appointment of the Davidson County Commissioners on the Youth Council for Davidson Works.

Maxine McCall
During a 30-year career with Burke County Schools, Maxine taught English/AG classes (9-12) and was K-12 Coordinator for Language Arts, Foreign Languages, and Gifted Programs. She later taught English as an adjunct instructor for Western Piedmont Community College. Author of several award-winning books, she owns C & M Resources, offering programs and consulting for schools, churches, and aspiring writers.  A past president of Alpha Nu Chapter of Eta State (2008-2012), she served on three ad hoc committees charged with planning for an Educational Foundation: the Committee for Planned Giving, the 501(c)(3) Committee (chair), and  the Educational Foundation Committee (co-chair). Her experience with nonprofit organizations includes 20 years as State Administrator for NC Churches of God (Anderson, IN). During that time she also served 15 years as a Trustee of Anderson University, Anderson, IN, and 10 years on task forces to re-organize national ministry and administrative operations of the Church of God (Anderson, IN). A founding member on the Board of Directors for the History Museum of Burke County, she now serves on Boards of Directors for Warner Press (national nonprofit publishing house of the Church of God (Anderson, IN) and the North Carolina Society of Historians.

​Emily Weigel
Emily Weigel has served in a wide variety of DKG roles at state and chapter levels in three states in her 42 years of DKG membership.  She has served her NC chapter, Alpha Psi, as president, has been a regional director, and served on the International Personal, Growth and Services Committee.  She was President of Eta State Organization 2001-2003, during which time she established the multi-site training of incoming chapter officers still used today.  Emily worked as speech language pathologist for ­35 years and was active in the NC Speech, Hearing and Language Association, serving on its board of directors twice, and the NC Association of Supervisors in Speech Language Pathology and Audiology, serving as president and treasurer.  Emily works with the nominations committee of the Foundation because she knows many members statewide and remains a participant in state and International gatherings annually.

Gloria Quick
Gloria is a retired speech-language pathologist with more than 40 years of service dedicated to transforming the lives of children, preschool through high school, by improving their communication skills. During her career, she worked in a variety of institutions including Meharry Medical College, Region VI Guidance Center, Carolina Community Action and public schools in Georgia and North Carolina. She was also an adjunct professor at North Carolina Central University.
In 1995, Gloria exercised her entrepreneurial spirit by establishing Quick Communication Services, LLC, which provided speech-language pathologists to school systems in North Carolina. A passionate advocate for children, Gloria is founder or co-founder of the following programs: Reading to Preschoolers (RTP), Students Taking Academic Responsibility (STAR) and Parents as Partners in Education. Gloria believes in the expression, "to whom much is given, much is required" and has volunteered with the following organizations, Parents for the Advancement of Gifted Education, American Red Cross, Book Harvest, Families Moving Forward, E, K. Powe Elementary School, Githens Middle School and Hillside High School. As a member of NC DKG, Gloria has held a variety of positions at both local and state levels.
​The following honors are in recognition for her many educational contributions, Teacher of the Year Oak Grove Elementary School in Durham Public Schools, Hillside High School Service Award, Exceptional Children's Teacher of Excellence Award Warren County Schools, and the NC DKG Eta Chapter Community Service Award and state Golden Key Award.

​Dr. Sherry R. Willis
Retired educator after serving 19 years as a second/third grade teacher and kindergarten teacher in Burke County and 19 years as an administrator in Hickory Public Schools. She was twice recognized as Hickory’s Principal of the Year. Upon retirement in 2013 Sherry received the NC Order of the Long Leaf Pine Award for her service to education. Following her retirement Sherry worked with the NCDPI Office of Early Learning as an implementation specialist for the Kindergarten Entry Assessment initiative. Sherry supported school districts in regions V and VII as they worked to implement the new assessment process.
A 31-year member of Alpha Nu Chapter of NC DKG, Sherry has served as president and vice-president of the chapter. She is currently chair of the Communication and Marketing committee and serves as the chapter’s newsletter editor and webmaster for the chapter’s web site.
Sherry previously served as the chair of NC DKG’s Beginning Teacher Support Committee and as Region X Director. Sherry serves as editor of the NC DKG Educational Foundation’s newsletter, In A Nutshell. 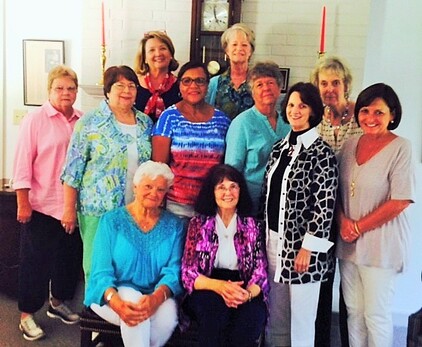